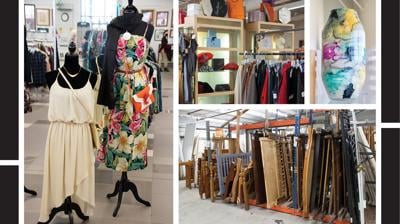 Spring cleaning encourages many to raid their closets, clean out their garages and finally get rid of items they just don’t want any more. In Tulsa, you can find a new home for most any of those items by donating to one of several nonprofits that will turn your trash into someone else’s treasure while helping the organization meet its bottom line.

Since the pandemic began, several nonprofits have had to shift their donation and sales processes, some even shutting down to protect customers and staff.

Here are stories of what one can find at any of these resale shops.

Yolanda Taylor was a customer of Bargains Thrift Shop long before she was a volunteer for the Assistance League, a 51-year-old nonprofit that helps Tulsa-area children with new school uniforms and personal care kits through Operation School Bell.

A neighbor introduced Taylor to the Assistance League in 2017. “That look on a child’s face when they get a new pair of shoes … I was in,” Taylor says. Today she serves as president of the 250-member organization.

Taylor has helped her son set up his apartment with finds at Bargains. She is always on the lookout for a new pitcher to add to her collection, a gift or a piece of CorningWare’s blue cornflower bakeware, which reminds her of her mother.

Houseware is an important part of Bargains’ inventory, as well as the collection of high-end clothing and one-of-a-kind home items. A recent visit to the midtown shop spotted a Barry Bricken collection jacket with a Miss Jackson’s tag priced at $14. Across the aisle sat a set of six crystal brandy sniffers for $24. There are clothing departments for men, women and children, as well as seasonal items, jewelry, accessories and furniture.

Organized committees of volunteers sift, sort and clean literal tons of donated items Assistance League receives each year. “They cull through donations to ensure we’re putting the best things on the floor,” Taylor says. “Everything is priced to sell.”

If something doesn’t quite meet Bargains’ standards or sales niche, it heads to the “Waste Not Area,” where bins for partner organizations like Loaves and Fishes, Blue Star Mothers and Fostering Connections collect items for donation. Some get sent to textile recycler American Rags. Electronic items are sent to a local processor.

The COVID-19 pandemic forced the Assistance League to close Bargains for months to ensure the safety of its customers and volunteers. “We were worried people would forget about us,” Taylor says. Rest assured, there was a line that formed out the door when the shop reopened Feb. 2.

Taylor says sales at Bargains represent “a considerable part of the budget,” which funds the organization’s uniform and personal-care kit inventory. Over the pandemic, Bargains lost 60% of its income and the organization has been doing a lot of fundraising to ensure its mission is continued.

“We must be able to pivot,” Taylor says. “There’s still the need that existed before this happened. We made a promise, and our goal is to deliver on that promise.”

Assistant league Tulsa’s 2018 Style Show featured fashions from our Bargains Thrift Shop. Held at the Club at Indian Springs, the show’s theme was bags. Handbags of every size, shape and color accessorized outfits ranging from casual to formal. Models from our jewelry department interpreted “bags” in a unique way!

Phyllis Dotson has story after story about children in Tulsa. It can be heartbreaking.

Dotson doesn’t get down about it. She does something about it.

Through her volunteerism with the Assistance League of Tulsa, she has literally helped put clothes on the backs of low-income children.

She has helped eligible students brought to the organization to shop for new school clothes. She has worked the cash register at the nonprofit’s Bargains Resale Shop, which provides income for the programs. She’s done everything in between.

“They couldn’t pay us. It’s priceless,” Dotson said. “We get so much back. Our generation is not one that wants to stay home, and it’s great to see the millennial generation wanting to join in.”

This enthusiasm is surely part of why the Assistance League is bucking a trend.

At a time when many area nonprofits are reporting financial difficulties, the organization has posted record revenue. In one year, its income jumped 43 percent to $911,000.

“It’s a big help, but it’s a tip of the iceberg of the need,” said Sharon Atcheson, the Assistance League’s president. “The need is still greater than what we have a budget for.”

That’s the paradox about social programs. When the economy is slumping, needs go up but donations are harder to get.

The Assistance League doesn’t receive government money. It isn’t part of the United Way, either.

The 46-year-old nonprofit exists through its memberships, income from its Bargains store and private donations. It doesn’t hold events but does ask for money, and it strives to be strategic for efficiency.

Dotson and other volunteers often write personal thank-you notes to those who support the agency.

The group had 42 new members join last year, which its national organization says may be the biggest jump of any of its chapters. The Assistance League of Tulsa has 230 active members.

“This organization has a light-handed approach,” said George Dotson, co-chair of a capital campaign with his wife, Phyllis. “It’s a light, friendly touch.”

“I’ve been involved in organizations my whole life. This organization is unique,” he said. “There is no factionalizing in the structure. There are people committed to the mission of the organization and moving toward that mission.”

Its mission is simple: provide clothes to children in families who cannot afford it.

The Assistance League’s signature program is Operation School Bell. This year, 1,490 students at Tulsa Public Schools will be clothed through the program, in addition to 1,205 students in suburban schools.

In the suburban areas, arrangements are made for volunteers and students to meet at Walmart stores to shop. In addition, similar programs are available for middle and high school students.

All students are referred to the program by the school counselors from 14 school districts.

The Betty Bradstreet Assistance Fund provides at least $45,000 in grants to teachers.

Many Assistance League members are former educators or in some way associated with education.

Atcheson taught in TPS for 38 years, retiring as principal at Lee Elementary.

“When we retire, we don’t miss lesson plans, we don’t miss faculty meetings. But we miss the kids,” Atcheson said. “This is how we can get our kid fix. Educators are drawn to this.”

Financially, the nonprofit has a diverse income base. Last year, about 37 percent of its revenue came from the resale shop. The rest broke down by 25 percent in grants from private foundations, 13 percent from investments, 13 percent from a letter campaign and 12 percent from unrestricted donations for Operation School Bell.

Nearly 85 percent of income goes directly to the programs benefiting children, officials said, and the other 15 percent is used for operational costs of the store, warehouse and building. No one is paid.

The proportion going to programs is a far cry better than the 60 percent recommended by the national group.

The Assistance League of Tulsa will be moving next spring from its location at 3408 E. 11th St. to Legacy Plaza, on 31st Street just east of Yale Avenue.

It will be neighbors with other nonprofits including the Community Action Project of Tulsa, Mental Health Association Oklahoma, Oklahoma Center for Nonprofits, LIFE Senior Services and Vintage Housing.

The capital campaign of $5.5 million for the move has been reached.

The Bargains store will move, too. Its chic appeal has been popular with the younger clientele and those looking for a bargain. Items for the thrift boutique are donated from stores, estate sales and individuals. Anything not used or sold gets donated to a partner social service agency.

When asked how the Assistance League has managed to be so successful in difficult economic times, Phyllis Dotson had a simple answer: “We have a very committed group”.

A letter of thanks to the Assistance League of Tulsa

A few months had passed since spending $600 on a wedding dress, when trying it on a few weeks before the wedding, she could barely get it zipped because she bought it fitted, nonreturnable and unalterable. My sister was in a panic seeing her daughter cry. She absolutely didn’t know what to do since they Couldn’t afford a new dress at this late date. I mentioned that I saw a dress at Bargains but knew nothing about it except that it was absolutely stunning. We drove over to look at it and the bride fell in love. It was priced at $65.00 but there was an additional 50% off that day, so we got it for $37.50 + tax. Dress and Veil. UNBELIEVABLE! We just had to have it taken up in a few places and she looked like a princess walking down the aisle. There is no way our family would have EVER been able to afford such a dress. It was clear this dress would have cost in the thousands originally. All I can say, is Bargains came through for our little humble family once again. You could not have scripted a more perfect wedding from beginning to end. Endless thanks from our family to my family at Bargains.

Watch this video for a comprehensive look at ALTULSA!